Your Cart is currently empty.

You are here: HomeLatest News 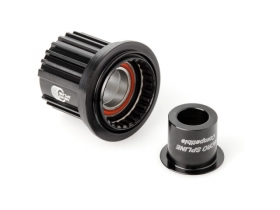 After much waiting and speculation the 12 speed micro spline standard from Shimano is available as an option on our rear DT Swiss MTB rear hubs.

Initially launched for the new XTR M9100 group set, it is highly likely to trickle down the Shimano range over time. The new 12 speed micro spline is Shimano's answer to the SRAM XD, overcoming the restriction of the previous HG freehub body by enabling a 10 tooth sprocket on the cassette, which is more conducive to the gear range requirements of the latest 1x drive trains.

We make no secret that we are huge fans of DT Swiss hubs with their 240s range being a particular favourite of ours.